This talk will look at the history of Cambridge Castle over the last 1000 years.

Cambridge Castle was built by William the Conqueror in 1068 on a site that had already been a Roman and then Anglo-Saxon town for almost a thousand years. It had also been the control point of a wide area, latterly the county of Cambridgeshire, and this role was to continue into the 21st century. Mostly the area was quiet, responsible for administration, justice and punishment, while normally held ready (at least theoretically) for defense of the town and County although it never actually saw warfare.
Cambridge Castle Website 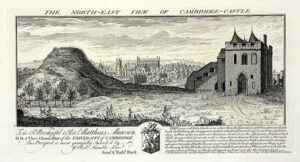 Alison was county archaeologist for Cambridgeshire 1974-1995 and has written several books on archaeology, mostly related to the town or county (including ‘Cambridge: the hidden history’, 1999. This year she annotated and published ‘Antiquities in Cambridgeshire drawn by Richard Relhan, 1797-1838’ online through Cambridge University Library. This is now freely available to all and contains over 300 drawings of early 19th century Cambridgeshire (churches, monuments and heraldry, houses, antiquities and village views).

1 Engraving of Cambridge Castle in 1730, including the motte (l) and the gatehouse gaol (r)

A waiting list will be set up and once the maximum number of tickets have been issued.. Registrations will close at  19.30 hrs on Wednesday 16 February or earlier if if there are 15 people on the waiting list. The event will be chaired by Richard Robertson, chair of FMRL

In the interests of everyone’s safety it is recommended that masks should be worn while inside the library.